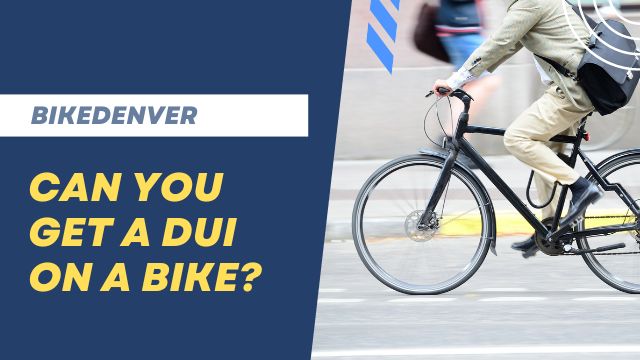 Bikes do not constitute a type of motor vehicle. But it is not that you can 100% ignore the traffic laws while bicycling.

We know that many people still get confused when it comes to this big question. Despite differences between motor and non-motor vehicles, Governments could apply similar regulations for all of them. And the DUI is not an exception.

Being aware of the bike laws can help bikers avoid unexpected troubles when joining the traffic. So, can you get a DUI on a bicycle in different places such as cities, states, and countries?

Can You Get A Dui On A Bike?

The answer is NO and YES, depending on your current state. How different states handle those types of cases, tends not to hit the same.

In some places, riding a bicycle while getting drunk could be less problematic in terms of the law. That said, it is never a good idea.

Due to sharing the road space with many other vehicles and pedestrians, every bicycle rider must stay aware of the surroundings. But the drunks often find it quite challenging. Consequently, troubles such as accidents and crazy traffic jams will be inevitable.

The term DUI stands for Driving Under the Influence. It defines the case in which someone operates the vehicle after using alcohol or drugs. In other words, those people keep more than 0.08% of blood alcohol levels, drugs, or other controlled substances in their blood. You can also call it BAC (Blood Alcohol Concentration).

Application of the “Driving Under the Influence” varies by state. However, several blanket regulations are affecting all cases. For example, the police officers and other witnesses will determine if the drunk needs to take any further intoxication-related testing.

By observation on the general riding behavior, a police officer can arrest the suspected people for DUI determination. For example, a cyclist is weaving or failing to obey traffic rules. Besides, the officer could smell some alcohol on that person.

What States Can You Get A DUI On A Bike?

One of the typical places for this application is Ohio. Some others include Alabama, Colorado, Connecticut, Florida, Georgia, Hawaii, Idaho, Indiana, Texas, etc.

In general, the “Driving Under the Influence” conviction is a misdemeanor in most places. The key lies in how the observed states define the bike as a motorized vehicle or non-motor vehicle.

In most states, the police officer will charge guilty people getting a DUI with a specific fine. The payment is often around $250 without any jail time. Although the DUI is a misdemeanor, it will present a criminal record.

Moreover, it would help if you did not ignore several additional offenses. Once you interfered with public area usage, you get another offense related to public intoxication. Plus, you will have to pay an additional penalty due to getting a DUI under 21 years old.

It is a common conclusion that cycling can be a perfect choice to go home after a night of alcohol (or drugs, sometimes). If you are one of those people, it is such a bad mistake. Like in Ohio, the Government announced an official prohibition on operating vehicles (including bicycles) under the drug/alcohol influence.

Regardless of the law, the fact points out that about 25% of deaths by traffic are the direct consequences of alcohol/drug impairment. Hence, keep this precaution in mind unless you want to be a part of that alarming statistic in the future.

What To Do When The Police Pulls You Over

At this point, is it illegal to ride a bike drunk? There is no doubt that the answer is YES in many specific states, such as Ohio and Florida. Provided that the police pull you over because of suspicion of DUI. So, what should you do in that case?

There is always a certain solution that can help maintain yourself safe if you follow it. Quick roadside testing for cyclists is nearly the same as for motor vehicles. Thus, you do not need to ask the police too many questions.

Then, it is time for the police officer to present several pieces of evidence to show reasonable suspicion of you. As the best solution, we suggest complying with his instruction regardless of your agreement or disagreement.

In case of an un-rightful stop, the officer will deal with the issue later. But it would be better for you to follow the procedure first for your safety.

And the following list includes five key steps to take whenever a cyclist gets pulled over by the police.

Tips For Safe Biking Without Getting Fined

You could be under suspicion of DUI even when you do not use alcohol or drugs. It is because you look a bit wasted on the bicycle, sometimes.

With that unwanted fact, we would like to bring various tips for cyclists. They can help you have safe biking without getting fined.

To sum up, can you get a DUI on a bike by not operating a motor vehicle? It depends on where you live and join the traffic system. Regardless of the answer based on the law, no one should operate any vehicle under the influence of alcohol or drugs. It would be safer for you and many other people on the street.

I've been a semi-professional cyclist for 7 years and currently coach classes at BikeDenver. I want to share my passion and experience with those who love cycling, let me make your journey better.

What Does BMX Stand For On Bikes? BMX Bicycle Meaning

V Brakes vs Cantilever Brakes: Which Brake Is Better?

The 13 Types of Bicycles (Characteristics and Features)

How to Charge An Electric Bike Battery? E-bike Charging Tips