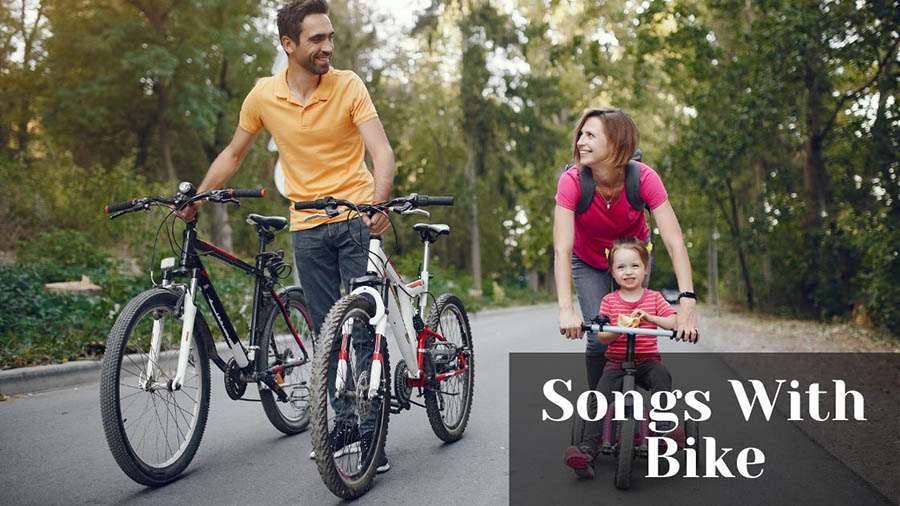 Summer is at its full blast, with the blazing heat and blooming life. There is no better way to chisel your body than by amazing bicycle adventures in the wilderness with some music! But what songs with bike are best to boost your morale while cycling?

Sure, cycling with friends and family is fun, but you might feel lonely pretty fast when you cycle alone. That is why a little music will spice up your bicycle trip and give you motivation!

The first series of music for biking consists of classic songs for bike enthusiasts who are also classical and old-but-gold music lovers. Blast from the past!

Nothing can beat starting up your cycling trip with some intense classic rock vibe from Queen. Written by Freddie Mercury in 1978, the song was one of Queen’s most amazing and controversial hits at the time with naked women riding bicycles featured in the original music video.

It was quite a new concept in the music industry due to the fact that not many songs used bicycles as the main theme. As unusual as it is, the upbeat tunes with cheerful lyrics will lift your spirit (and your bicycle!).

Written in 2002, the Bicycle Song from the album “By The Way” by Red Hot Chili Peppers has a slightly lighter theme than Queen’s Bicycle Race. The mix of guitar and drum form a happy and peaceful pace for easy riding. Be careful not to get lost in the drift of the sound!

As a country ballad by Pink Floyd, this song does not use too many heavy instruments like other songs, yet it will make you laugh on the road of its funny and echoic voice of Pink Floyd. It is recommended to share this song with a friend while you take a short break from riding; it would be fun!

4. On A Bicycle Built For Two – Nat King Cole

This track can be considered one of the oldest bicycle-themed songs on our list. The song played by Nathaniel Adams Coles in the ’60s portrays a happy couple on a tandem bicycle. The tones recall the good old Christmas theme, in addition to a retro vibe that the 60’s old recording room brings about.

Aside from the cheering rhythms and lyrics, Broken Bicycles, as the name implies, carries a quite sad and slow flow for the listener. The piano sound and the “rusty” voice of Tom Waits will calm your soul while you are riding down the road. It’s best to listen under the rain to feel the chill of life and the lyrics flowing through your mind.

Last but not least, in the classic series, Mr. Blue Sky by Electric Light Orchestra will be the star of your playlist. It is crowned as the “happiest song in the world,” thanks to its cheerful concept and upbeat lyrics: “Sun is shining in the sky, there ain’t a cloud in sight….” Let happiness be the power to fuel your pedal on the road!

The Thrilling Anthem For Riders

Our next list of songs consists of modern upbeat music for biking that will boost your adventurous spirit and empower your muscles as you ride uphill! They may or may not be famous songs, but you will feel the burn just as you hit the “play” button.

Imagine Dragons are famous for their outstanding songs like Radioactive, Believer, Demons, etc.; however, you might not know of or have forgotten their old gem back in the day when they began their career – It’s Time.

With a deep and strong pop-rock beat, It’s Time is an adrenaline shot for try-hard riders working out to their heart’s content. The sound of mandolin and bass guitar makes a stunning beat that will surely melt your heart.

A hit by OneRepublic, this is the most successful single of the band. The song took the first place in many music charts in Canada and the United Kingdom while also standing in the top ten in the U.S and 20 other countries for many weeks. Counting Star’s music video is one of the most watched YouTube videos of all time, with over 3.6 billion views.

The lyrics bring about a story of self-exploration with willpower and big dreams. As the sound flows through your ears, you will receive a heartful lesson of never stopping striving for success.

Among this category, Houdini is one of the classic songs about determination in the 2010s. The mix of upbeat piano chords and drum beats made this song an unforgettable experience for those who listened to it the first time.

The best part of the song lies near the finale: “Focus on your ability… Gain again what they wanna steal…”. The climax with an extremely meaningful line about staying determined will give you plenty of energy to pedal faster!

After a long stretching ride, you might start to feel tired. It’s time to kick back and hit a series of slow and light songs with bike themes to calm your mind and muscle.

There is no word to describe the beauty of this song. The original version was a bang, but Flight Facilities has made a wonderful remix with a slow and calm flow of sound that will touch your soul. It has been exclusively used as an original soundtrack for a triathlon mission in Grand Theft Auto V, a popular action video game.

The song is a beautiful mixture of nature and light electronic sounds. Every phrase carries a deep meaning about enjoying little things in life and staying positive about the future. Slow your pedal, and let the rhythm bring you to another world!

Daft Punk is credited for its mystical Astro-themed electro beats; therefore, Instant Crush will introduce a beautiful, magical world where stars and galaxies fill the dark abyss. The deep and calm voice of Julian Casablancas will bring your mind a peaceful sense of tranquility.

There is no better occasion to enjoy this song than cycling at night. Riding on your own, slowly allowing your body to feel the road and the night sky as the music tranquilizes your soul.

The name says it all; this indie song is about snow riding. A cold and lonely breath of the violin and piano will drive you to chill and relive memories of a cold winter in the past. The composer is an underestimated talent, so you should definitely check out his other works on YouTube.

This is also the only non-vocal song on our list, so it will be a perfect choice for those who enjoy ambient-only music with little to no human vocals. Listening to this song on a winter day while enjoying a hot cup of cocoa after a long bicycle ride in the snow would be ideal.

With the series of songs on bicycles, you will never feel bored of cycling again. There are many other amazing songs to add to your list, but these are the perfect tracks to listen to while urban cycling. Remember the safety tips, and keep a medium volume while riding to protect your ear and avoid bumping into other people and vehicles.

I've been a semi-professional cyclist for 7 years and currently coach classes at BikeDenver. I want to share my passion and experience with those who love cycling, let me make your journey better.

What Does BMX Stand For On Bikes? BMX Bicycle Meaning

V Brakes vs Cantilever Brakes: Which Brake Is Better?

The 13 Types of Bicycles (Characteristics and Features)

How to Charge An Electric Bike Battery? E-bike Charging Tips